An interesting question was posed to us on Quora this week – what’s the impact of user onboarding on the total lifetime value of a customer?

We brainstormed a bit internally, and came up with the answer below – essentially, it’s a hard thing to work out but it is possible if you make some sensible assumptions.

At first glance, this is a tricky one to answer because lifetime value (we’ll go with LTV from now on) is a revenue metric, based on how long the customer is likely to pay a company for before they leave.

As a quick reminder, a simple way to calculate a customer’s lifetime value as total revenue / churn. 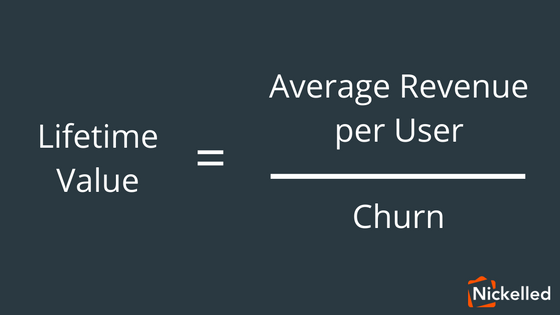 So LTV is a revenue metric – but a good onboarding experience doesn’t immediately translate into a number we can just plug into the equation.

Normally, SaaS businesses measure the effectiveness of onboarding in terms of their retention – how many customers will come back and use a product after signing up? In an ideal world, of course, you’d be able to just switch on an app and have it deliver value without any manual intervention, but there are relatively few apps like this so active users has emerged as one of the key yardsticks by which to judge a SaaS business.

Sidenote: We recommend a mix of retention, conversion rates and other key indicators, such as completion of Key Activation Points, to judge the success of your user onboarding.

The tricky part is that retention isn’t directly tied to churn, especially monthly churn. By the time most businesses come up with a churn number, it’s factoring in a lot about their business and it’s applied to the entire customer base, regardless of whether they’ve been a customer for one day or one year. And as we know, user onboarding is most effective at the start of a user’s journey.

For instance, a standard benchmark of monthly user churn in the SaaS industry is around 5-10% per month, according to this awesome dash by Baremetrics – but it’s not untypical for some of our clients to see 50% retention when someone signs up for their app the first time. In order to quantify the impact of user onboarding, we need to do some calculations that can take both of these variables into account.

So here, we have to factor in a new number, which represents our ability to keep new customers based on how good their onboarding experience is. We’ll call it new customer churn (NCC).

NCC is an assumption because it’s not a metric most businesses measure or choose to report (unless they offer a free trial, in which case the trial-to-paid conversion ratio is a similar indicator). However, it stands to reason that for many SaaS products, users are likely to try the service in the first month and end their subscription quickly if it doesn’t work out for them. If you segment churn rate by month of usage, you’ll normally see that it spikes in month one (M1) and then normalises.

New customer churn is the best way to translate retention into a revenue metric, because it combines both existing churn and new churn to come up with a combined number:

NCC is normally higher than existing churn, understandably – it’s far more likely that a new user will leave you than an existing user will. However, NCC is also critical because of the devastating effects of churn on business.

To illustrate: a company with 5% churn and 1000 users needs to add 50 users a month just to stand still. If it fails to do that, it will be in decline immediately – despite having what appeared to be a healthy customer and revenue base in the first month. So NCC needs to be as low as possible to allow the business to make maximum use of the new customers coming in to offset existing churn.

Armed with our NCC number, we can calculate overall churn for a business. Let’s make an assumption that our business has a 5% existing customer churn rate, and a 50% new customer churn rate. Let’s say we’re adding 100 new users monthly and essentially, we lose half of our users in the first month because of poor onboarding.

The chart of our users lost through one year (by month) will look something like this: 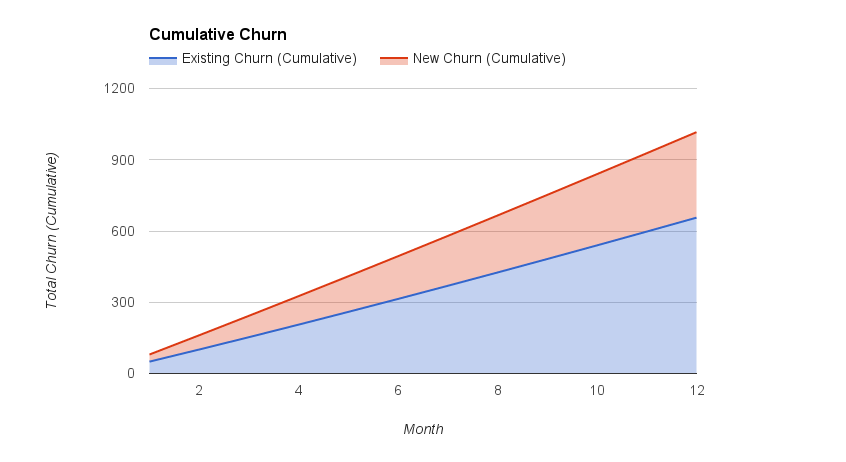 Now, let’s assume our company pursues some tactics that improve the user onboarding experience and increase retention (like, ahem, using Nickelled). If we can bring users back in the first month, we’ll assume that brings down the NCC from 50% to 30%.

Of our total churn, in month one 37.5% of it is coming from new users. But by month 12, only 34% is, because our user base has grown. And our total churn rate has dropped from 10% to 7%, just from improving our user onboarding and reducing M1 churn.

All of a sudden, our growth looks very different: 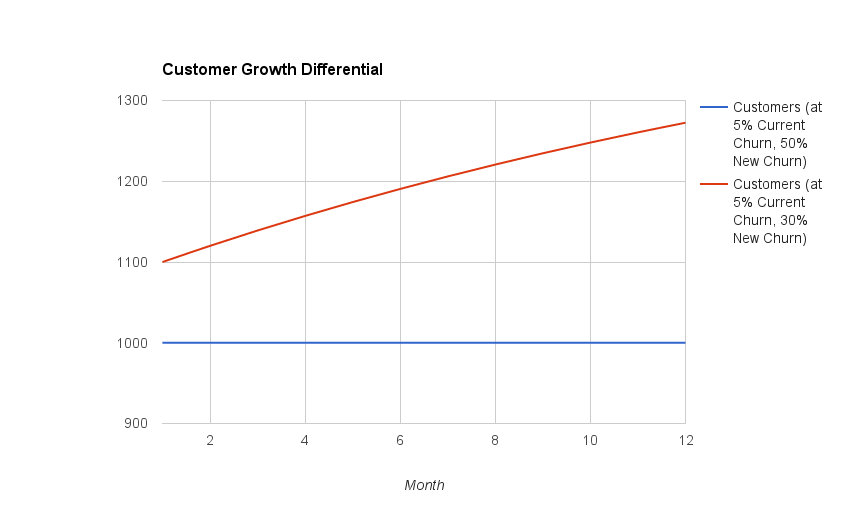 In total, our business has grown revenues by $183k, or 18%, rather than stagnating.

And to go back to the original question, we can recalculate the LTV using our first formula – because with a churn rate of 7%, customers will stay for an average of 14 months before they churn, instead of 10. So our LTV has become $14,000 – because of better user onboarding.

This was the best way we could think of to quantify the impact of better user onboarding on LTV and churn. Do you know a better way, or have you seen other effects? Let us know in the comments below, or Tweet us @nickelledapp.