What happens during those first few minutes that a user tries your platform for the first time?

Despite the incredible value of asking (and answering) that question, it’s one that many product people don’t think about enough.

I was recently around a very interesting continuum of product people – first at the MindTheProduct conference (nerdfest for product managers) and then CTAConf (nerdfest for content, UX and conversion pros).

So I decided to go around asking people the following:

“What are the results of your users’ first session?”

I mean, marketing has been selling the dream, product managers have been developing a product aligns to that dream and customer success make sure that dream comes true.

Those three things should now fold into that one magical moment: new user activation. You know, like Slack does it.

This is THE ONE CRITICAL MOMENT for all your collective efforts, right?

But interestingly, few were focused on this. Depending on their role, they were aware of other things. Like their email open rates, or their trial-to-paid conversion rate – but not many were really thinking about the user’s first session.

Nor did they know they should. Let's explore this.

Thomas Tunguz is a VC at Redpoint who (I assume) spends a lot of time trying out apps and platforms while deciding who is deserving of his cold hard cash.

Here’s how he felt after trying a series of products for the first time:

All the products I tried either stepped me through an explanation of the product or simply left me at the home screen after registration.

I felt like an new employee during my first day at work. I had signed my W-2 tax form, received an email account, been shown the route between my office and the lunchroom, and then told to get to work.

Good GOD, he was thinking about tax forms. If your user’s first login experience evokes thoughts of tax forms, you are in trouble. 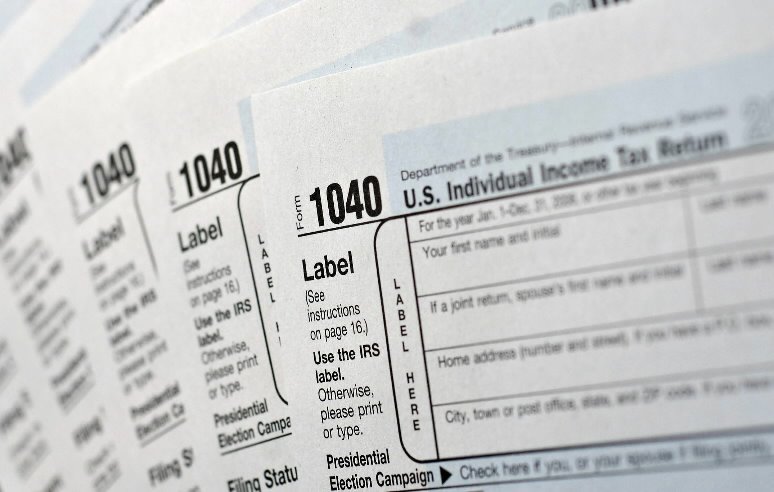 What else does this tell us? That the user’s intent to buy (or use) is formed within minutes – not days, not weeks – of the first login.

But many (or most) onboarding flows? They’re designed for WEEKS.

Those are onboarding flows that run on a whole lot of faith. They believe they have weeks to hook and delight a user, and perhaps that if they don’t win them the first time around, they can get them back later.

Consequently, this is how many (possibly yours too) look:

Sure, this flow absolutely works – you’ll get some of them back. But many users and would-be customers will also be too uninspired to return.

“I’m done. I’ve moved on,” they think to themselves as they roll their eyes and delete your pleading automated emails.

Trying to get users back for Round 2 is a much more difficult sell than the first time around. So don’t do this.

If you focus your user onboarding efforts on the first session rather than spread out over a 14-day trial, you’ll see very different results.

For example, the team at Groove looked into their churned vs. paid user conversion rates and found that the length of first session and frequency of logins strongly determined whether they would quit.

That got them a 26% response rate. More than 40% of the users who accepted the personal walkthrough were still Groove customers after 30 days. 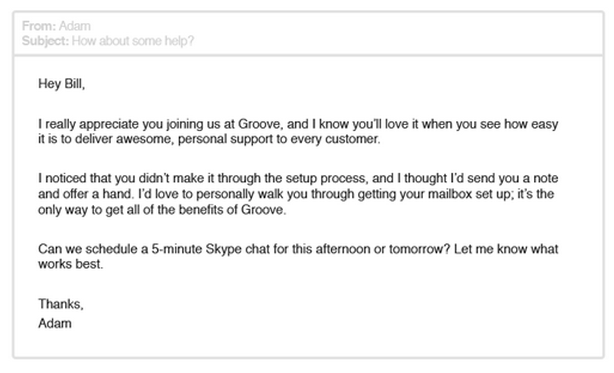 The email saw around 15% response rate, and nearly 50% of those users were still active after 30 days.

Groove found that this lowered their churn rates so dramatically that they continue to focus on monitoring their first-time user activity.

The data (but also common sense, right?) proves that zooming in on the first session significantly moves the needle.

Why wait to save these users later? Save them now. Carpe diem, friends.

So what have we learned today? 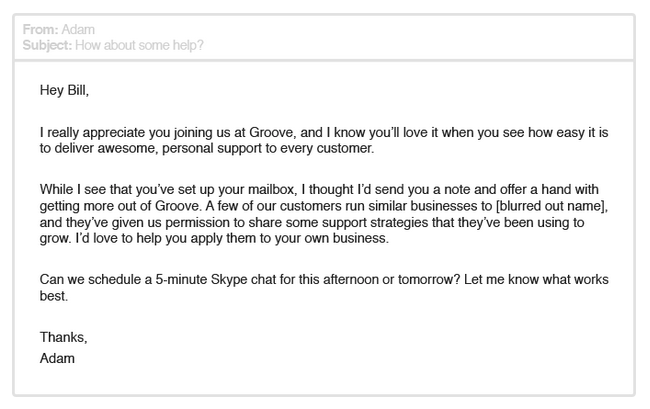 It takes a little humility to realize that there NO guarantee that customers will login twice over the course of their trial period. The luxury of time is an illusion. So focus your efforts and make the first impression count.

Want to find out more about how user onboarding software can make your first session hum like a Cadillac?