Here’s a question. Can too many customers ever be a bad thing?

Two years ago our business ran into in trouble — but it wasn’t the kind of trouble we’d always expected when we founded a SaaS company.

We weren’t running out of cash, struggling to hire, or dealing with a high churn rate.

We were struggling with too many types of customers.

Intuitively, this shouldn’t have been a problem. It should have been GREAT.

But my co-founder and I were burnt out. We were giving product demos at all hours of the day and night, replying to emails and burning the candle at both ends to ship the latest feature requested by our customers.

The worst thing? Our business was at a standstill. All that effort was leaving us with minimal growth, a hopelessly confused product roadmap, and two cofounders run ragged.

It took us months to realize that complexity was killing us.

How minimalism saved our business 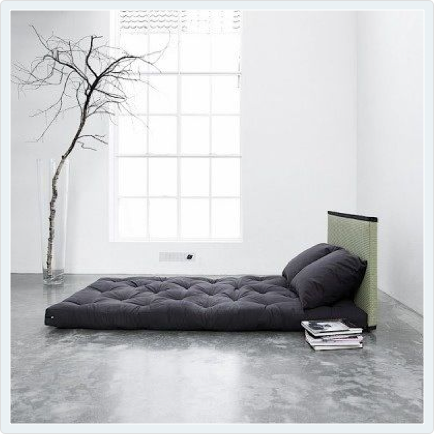 Most people think of minimalism as a personal philosophy; something that results in empty rooms, beautiful architecture or closets with only one type of turtleneck inside them.

For us, minimalism became a business philosophy, and it saved our business.

Back then, Nickelled was just a guided tour maker, and we aimed to serve anybody who needed to build an awesome guided tour.

We’d invested thousands of hours in building the world’s easiest guided tour maker — the whole thing was drag and drop, you didn’t need to install any software and the guides could be viewed anywhere. The team were justifiably proud of the technology — our unique approach cut the process of guide creation down to minutes, and everybody who tried it out was blown away.

For a SaaS company, we were lucky — with the unique tech, it didn’t take long for us to bring our first clients on board.

Our first client, Gleanin used our guides to show potential customers how their software worked.

Our third client used our guides to welcome new users and show them key features in their app that they might have missed otherwise.

After six months, our client growth was looking really positive, and dreams of a Ferrari were flashing through my mind with alarming regularity. I’d probably go for red (it’s a classic, right), but hey, maybe the black would be sleeker?

Then, the problems began to hit.

Increasingly, we’d lose leads to competitors because they had a specific feature request we didn’t offer. We struggled to provide decent technical support, because every implementation of Nickelled seemed to be slightly different and it took a long time to understand why customers were facing particular issues. Our new growth efforts were floundering, and all of our ads had a really poor interaction rate. And when we could find time to build new features, they were met with a collective ‘meh’ from our customers.

At first, we didn’t link them together. But gradually it became obvious that we’d made a near-fatal mistake. We had no target market. We just had many markets, and we wanted to serve them all.

There are a couple of reasons we absolutely had to fix this, and fast:

1) It was leading to unhappy customers

Although we made excellent guided tours (and, ahem, we still do), it didn’t take long for customers to start asking why we weren’t adding features that made their tasks easier.

When we explained that we’d add the feature to our roadmap, most customers were happy; though some grumbled about how we should probably offer it already and often, would subsequently move to a competitor.

The breadth of use cases also meant that our developers spent huge amounts of time troubleshooting issues that they hadn’t come across before. Nine times out of ten, the customer had jimmied Nickelled into a system or process that we’d never designed it for, and they were subsequently struggling. For each ticket, a developer had to understand the intricacies of the implementation, dive into the code and identify the issue.

Sometimes, that simply led to the realisation that we probably couldn’t help the customer anyway — at which point, the justifiably disappointed customer would leave.

Finally, we struggled to quantify the success our product was having. For some customers, success meant reducing ticket volume. For others, it meant increasing sales. When we spoke to our customers, we could never tell them why they should be proud of using Nickelled, because we didn’t have any universal KPIs to measure success. Our annual meetings with our largest clients invariably meant scrabbling around for information, looking for positive KPIs that we didn’t really have from metrics that weren’t designed to provide them.

2) It made selling our product nearly impossible

On reflection, it’s a miracle that Nickelled sold as well as it did, for as long as it did. The limitations of our approach could have hit a lot earlier — we were truly offering a piece of software that was a jack of all trades, and a master of none.

When we spoke to would-be customers on the phone, they’d invariable ask “do you offer [feature for specific use case], like [use case-specific competitor]?”

Of course, our answer was always no — we were focused on kick-ass guided tours, and that was it. Sadly, a “kick-ass guided tour” wasn’t what our customers wanted. They wanted a solution to their problem, and we couldn’t offer it.

On top of that, our marketing messages were really struggling to land. Customers would click on an ad with copy that specifically referred to one use case, and land on a site which was nowhere near as specific. Occasionally, they’d land on a page which featured a completely conflicting use case.

Every time we attempted a marketing push, the results were significantly below expectations.

3) We struggled to define a future for the product

With so many different feature requests, our product roadmap quickly became unmanageable. We’d conduct detailed customer feedback sessions and attempt to score feature requests to prioritize them in our build sprints, but all that happened was that the feedback statements and scores cancelled each other out.

Instead, we tried building features that we figured everybody could use, but they were met with a distinct lack of enthusiasm.

Looking ahead, we could see that our product was at risk of becoming a Frankenstein product, which did too many things and was hopelessly confusing for users; something that kills many companies and is negatively affecting some of our competitors in the market.

4) It was making us very, very unhappy

I don’t think our team has ever been as demotivated as we were in this phase — and it wasn’t just because of the problems above.

We were facing significant issues with defining our company, which was making it difficult for us to grow as individuals as well. Our expertise (or lack of it) was spread across so many different use cases that we couldn’t really speak authoritatively on anything. Our #reading channel on Slack was a hot mess of books we’d read on everything from customer support to sales, and we’d mastered precisely none of the lessons in them.

Personally, we were drained. Our goals, which we’d set ourselves, we’d invariably fail to meet, so for our next sprint, we’d change them to focus on something else entirely. Every time we checked on them, the numbers were at best standing still, and normally going backwards.

Our sense of mission — of what we were working on, and why — fell to an all-time low. It was time to take action.

In retrospect, what we did was take a leap of ill-informed faith.

In early 2016, we convened in London and decided to reboot our business. We knew that we’d been focused on too much, and as we listed out our problems, the solution became clearer.

Most of our problems could be solved by cutting out some of our business use cases. it seemed obvious that the decision would make some of our customers far happier, it would dramatically reduce the demands on our time, it would simplify our marketing efforts and it would give the business a clear goal to reach.

Even knowing all of that, the idea of minimalism was terrifying.

In reality, we knew that this meant that we’d shed a bunch of our customers. Although we planned to keep offering our service to those who didn’t use Nickelled for user onboarding, our expectation was that they would soon get frustrated and find another solution. It took us a while to make our peace with that — some of these were very early believers in our business, who were paying us good money every month, and it seemed crazy to put that in jeopardy.

We feared making the wrong decision on use case — what if the market was too small, or too competitive, or thoroughly uninteresting?

Eventually, we made a decision. People regularly ask me how we decided that our focus should be user onboarding — and my answer is that we looked at some data.

And then some more data.

And then some more.

And eventually we decided that there wasn’t enough data in the world to push us in one direction or another, so we just picked a use case that seemed sensible and interesting, and went with it.

Sometimes you have to take a leap. Sometimes it won’t pay off.

But in this case it did; as soon as we made this change, things became unimaginably easier. Conversations with customers became enjoyable again, our marketing site started to perform better, and our product roadmap became magically clearer.

A year later, our sales have grown over 100% year on year, and they’re still rising double-digit month on month.

We came to a series of realizations which helped us to understand that minimalism when it came to use case was the only way we would be able to survive.

If anything in the story above sounds familiar, it might be worth considering whether minimalism can help your company too. 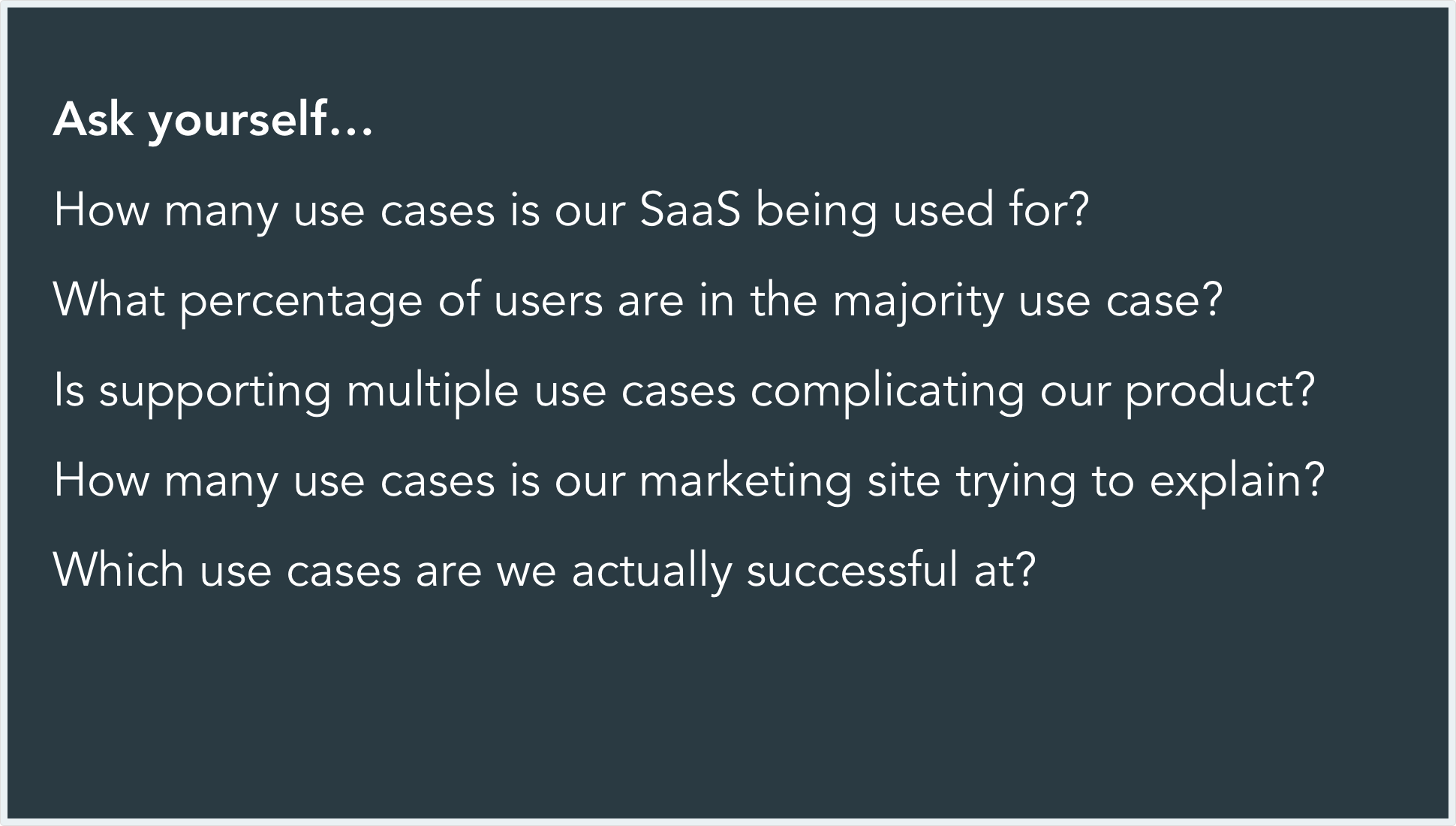 Think about the following questions:

Looking at the answers, which suggest that your company may be trying to handle too much?

Hopefully this post has opened your eyes to some of the potential pitfalls that can arise from too much complexity — and how minimalism could be the way to push your business even further.

This blog post is adapted from a talk given by Nickelled's Fraser Deans at GoSquared’s London Meetup – to find out more and watch the video, click here. The slides are available here.